skip to main | skip to sidebar

Australians delighted in making fun of the three Sydney 2000 Olympic Games Official Mascots -- Olly the Kookaburra, Syd the Platypus and Millie the Echidna -- with the creation of Fatso the Fat-Arsed Wombat, the Unofficial Mascot that quickly became more popular.

Here's just a sample. For more irreverence, be sure to click here!! 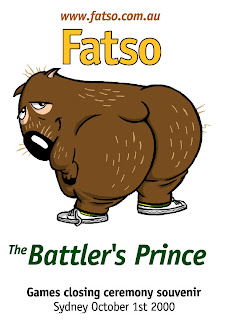 The IOC finally backed down to the pressure of the Australian public to allow Fatso to have his place in the Closing Ceremony.

It was fitting that Fatso was one of the first of our icons to appear before the people.

Fatso, being the true blue fat-arsed wombat he is, wanted to thank the IOC for their generosity, so he decided to return the favour by offering them a gift.

Fatso thought "What do I have to offer a large organisation like the IOC - something they wouldn't have, but could remember me by?"

So Fatso, proudly offered them a gift they could truly cherish - his droppings.

Drop by drop he ornated the track, much to the delight of the crowd, as well as the IOC.

But the IOC rejected Fatso's gift. While the fireworks were taking place, it was quickly snapped up by Corey, a 14-year-old from Lysterfield, Victoria.

No doubt his parents will place them for all to see in the pool room, alongside the other family trophies.

The skinny on Fatso - Sports Illustrated

The Rise of Fatso - The Fat-Arsed Sydney Olympics Wombat

Passionate Pin Collector
I received my first Olympic pin from a Swiss Olympic Gold Medallist at the Calgary Olympics in 1988. Since then, I've attended many Olympics, met many Olympians, met many other passionate pin collectors, and continue to enjoy the hobby of Olympic Pin Collecting! I hope you too will one day be as passionate about collecting Olympic pins as I am.